Location: Olde Courthouse, 104 Market Street, Salem, NJ
Due to social distancing restrictions, seating will be extremely limited.
This meeting will also be live-streamed on our Facebook page: https://www.facebook.com/salemcountygovernment

Freeholder Ben Laury is a lifelong resident of the Borough of Elmer. He has earned a Bachelor of Science degree in Mechanical Engineering from Drexel University and is licensed as a Professional Engineer and Master Plumber in the State of New Jersey.

Freeholder Laury’s commitment to community service is highlighted by his dedication to the Boys Scouts of America. He currently is serving on the Southern New Jersey District Board and personally holds the rank of Eagle Scout and recently received the Boy Scout Silver Beaver award. He is committed to his faith and his church and is actively involved in the Elmer Methodist Church. He has been an active Rotary member for over 30 years and is a Paul Harris Fellow.

Freeholder Laury has been married to his wife Kathy Laury for 40 years. They are blessed with two children Brittany (married to Stan Orzechowski) and TJ (married to Sarah) . They have four grandchildren: Mason, Carter, and twins Colton and Ryder. 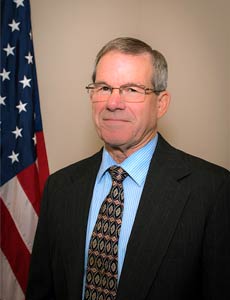 Scott Griscom is a lifelong resident of Mannington Township and is serving his first year on the Salem County Board of Chosen Freeholders.

He is a graduate of West Chester University and spent 32 years at Pennsville Memorial High School as the Physical Education Teacher and in coaching Pennsville Sports before retiring.

For the past ten years Scott has volunteered with Habitat for Humanity and for the past eight years has been a volunteer as assistant wrestling coach for Woodstown School District.

Chair of the Economic Development and Public Works Committee

Mr. Hassler lives in Salem City where he previously served on the Salem City Council. He graduated from Saint James High School then attended Salem Community College where he earned his Associates Degree in Business Administration.  He retired from the International Brotherhood of Electrical Workers, Local Union 94 after 37 years of service at the Salem/Hope Creek GemNuclear Generating Stations.  The last 13 of those years were spent as the Business Agent representing the employees of IBEW Local Union 94.

He is a Trustee for Saint Gabriel the Archangel Parish, where he also serves as a lector, he serves as a Board Member for Resources for Independent Living, and volunteers with Habitat for Humanity. Mr Hassler is the proud father of Aidan Hassler Wilson.

Freeholder Ware is a resident of Elsinboro Township, serving his 18th year as Freeholder, with six of those years as Director.

Lee graduated from Salem High School, a graduate of Glassboro State College (Rowan) where he earned a degree in junior high education, as well as, played baseball and went to the College World Series three out of the four years he played. He was a teacher in the Woodstown School system for 38 years. Freeholder Ware has been recognized for his coaching achievements being named All South Jersey Coach of the Year twice, and was inducted into the Salem County Sports Hall of Fame, New Jersey Sports Hall of Fame, Rowan University Sports Hall of Fame, Bridgeton Sports Hall of Fame, and the South Jersey Baseball Coaches Hall of Fame. He is in his 45th year of coaching the “Woodies” and holds a record in South Jersey of 643 wins to 390 losses, second highest in state records. Freeholder Ware was selected as the 2016 Leadership Recognition Award Recipient for his achievements as a Coach, Salem County Freeholder, and Retired Educator. Lee is the son of the late Preston and Minnie Ware. Lee has three children and seven grandchildren. Freeholder Gordon J. “Mickey” Ostrum, Jr. moved to Salem County with his parents at age four and has lived here ever since.  After completing his education Grades K through 12 in the Woodstown Pilesgrove School System he went on to earn a BS in Biology from Ursinus College in Collegeville, PA.  Freeholder Ostrum then entered Jefferson Medical College in Philadelphia, receiving his MD Degree in 1976.

After completing his studies at Jefferson Mickey began his Post Doctoral training as a Resident in Obstetrics & Gynecology at the Wilmington Medical Center, now Christiana Care Health System.  Finishing in1980, he became Board Certified in 1982, maintaining that endorsement annually.  Freeholder Ostrum entered private practice in New Castle County DE and Woodstown on completion of his training and continues to practice actively.

Mickey is also active in the American College of Obstetricians & Gynecologists serving as Chair of the Delaware Section.  With that position goes a seat on the District III Advisory Council and advocacy activities at the annual Congressional Leadership Conference in Washington.

When away from professional responsibilities Freeholder Ostrum participates in grain and cattle farming with his son Jake.  Mickey laughingly calls himself the Chief Medical Officer of Cowtown Rodeo having been involved with the rodeo since childhood.  He subs for his son as Music Director at the rodeo several times a season.  Mickey and his wife Kelly reside in Pilesgrove with their family.

History of the Board

New Jersey alone of all the United States has the distinction of retaining the title of “FREEHOLDER” to denote the elected members of the county governing bodies. This descriptive name, which commemorates the origin of home rule, is used by only 21 of the nation’s 3,047 counties. In other states, these county officials are known as commissioners, supervisors, probate judges, police jurors, councilors and a variety of other names.

An old English term, a “freeholder” originally denoted a person who owned an estate of land over which he had complete control. After the Norman Conquest of 1066 A.D., British kings found it necessary under pressure to call together an assemblage of higher clergy, earls and barons of the nobility and later Knights of the Realm, to sit as advisors and to grant taxes for defense of the kingdom. By the 13th century, through battles against abuses by royal power and the growing influence of Burghesses and Freeman, the British Parliament was enlarged to include these Freeman who owned their land free and clear, who were called “Freeholders.”

English history from this time onward is a story of the increasing power of the subject and his participation in the government. The Franklyn in Chaucer’s Canterbury Tales is described as being born a Freeman and “Freeholder.” He sat with the lord and knights of his shire (county) in the Parliament of that day.

The name “Freeholder” was well known by the 17th century, and the holder of the title had a definite place in society. Thus, when the first settlers came to the New World and settled what was to become “New Jersey” under the original proprietors, it is not to be wondered that we find the “Freeholder” prominently mentioned. In the first archives of East Jersey, signed and dated, we discover the origin of the name “Chosen Freeholder.” By crossing the sea, these stout-hearted men had already added a popular or democratic refinement to the traditional English name for a Freeman, although they still lived under the British Crown.

Uniquely, our original “Chosen Freeholders” were members of the state’s General Assembly, its first legislature, even before they became the elected representatives of the County Board’s of Chosen Freeholders. No other state in the federal union has so carefully preserved the ancient freedom of its representative government, in the historic title it still confers on its county governing officials.
By: Colonel John J. M. Dudley

To enhance Salem County residents’ quality of life by ensuring the safety, prosperity and wellness of our communities through responsive, innovation and fiscally responsible actions.

To provide the citizens of Salem County the highest quality of life by promoting: Public Safety; Fiscal Responsibility; Economic Development; Culture and Diversity; Health and Education; and Preservation of Natural Resources. We the freeholders will achieve these goals by embracing our core values.

County Residents
We will ensure public trust through honesty, fairness, consistency, follow-through and our continued commitment to the County’s culture and diversity.

Public Safety
We will adhere to a plan that ensures safe communities now and for future generations resulting in a higher quality of life for Salem County residents.

Health
We will provide accessible healthcare and promote wellness for all county residents.

Economic Development
We will deliver innovative actions designed to grow a vibrant local and regional economy while preserving our natural resources.