Meetings: Meets 4th Wednesday in the Ware Building at 7:30 pm 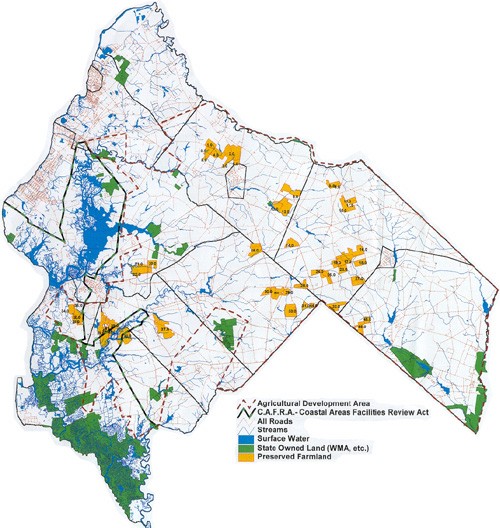 The mission of the Salem County Agricultural Development Board in implementing the Farmland Preservation Program is to protect quality farmland and support the local agricultural economy. The Board seek to preserve farms that are highly productive due to their tillable land, soils, proximity to other preserved farms, size and continued viability.

The Farmland Preservation Plan was initially adopted in 2006. The current version of the Plan was adopted on August 19, 2008. 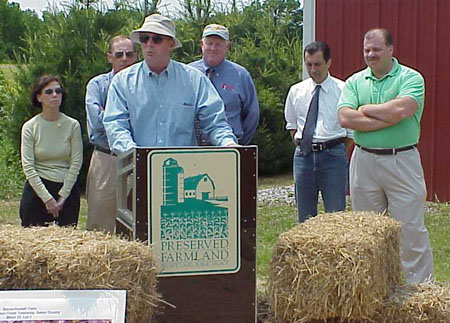 LOWER ALLOWAYS CREEK TWP. — Salem County recently became only the third county in the state to have 100 or more farms in the farmland preservation program, officials said Monday.

Agriculture Secretary Charles M. Kuperus called the 100 figure a “milestone for Salem County.” He and several state officials were on hand at an afternoon press conference to make the announcement.

The county reached the 100 mark in March, with a farm located in Upper Pittsgrove. That put Salem County in exclusive company: Hunterdon and Burlington counties are the only other places that have 100 or more preserved farms. Trailing them in fourth place is Cumberland County, which has 71.

At the moment, Salem County’s total stands at 102. State officials on Monday were at the home of John and Donna Szczechowski, whose farm on Harasta Road went into the program last month.

Theirs was one of two farms that were preserved May 28, and lifted Salem County over the century mark. The other was in Elsinboro.

John Szczechowski, appearing beside Kuperus, said he had bought his approximately 100-acre farm 10 years ago mainly to hunt. Last year, the Delaware native married, and has built a new home on his property.

Since buying what had been a dormant farm, he has worked to transform it by planting crops and making other improvements.

“What you see today is a working farm,” Szczechowski said.

Farmland preservation began in 1983, having cost $488.29 million. The money goes to acquiring the development rights on the farm, officials said.

Since the program started 20 years ago, 886 farms have been preserved statewide, totaling 107,934 acres, state officials said.

Of those acres, 15,317 are in Salem County. The county ranks second in total acreage, trailing only Burlington County, which has 15,838, state officials said.

He said the McGreevey administration “is committed to preserving 20,000 acres of farmland a year.”

State officials said farmland preservation was a way to slow the spread of sprawl.

“We’re actually in a race with development,” said state Sen. Stephen M. Sweeney, D-3rd Dist. “We have to do everything we can to prevent the loss of the way of life that we have down here right now.”

The other side of farmland preservation is aiding the state’s farmers, officials said.

They said an ethanol plant, to open in West Deptford, was an important step to helping farmers and finding markets for them.

Earlier this year, County Commissioners announced they had set aside around $700,000 to preserve farmland. Money was found in capital accounts.

A program allows the state to bear 75 percent of the costs, and the county 25 percent, official said.

Republicans have said county Democrats have failed to find a way to preserve farmland beyond this year.

County Commissioner R. Benjamin Simmermon Jr., a Republican who was at Monday’s news conference, said in a statement that the “county administration has not guaranteed a stable funding source for farmland preservation, something that the voters asked the county to do.”

County Commissioner Director Jack Kugler, also at the event, said: “Each administration will have to make that decision on a yearly basis on where to find the two cents or county portion of farmland preservation. It’s just a matter of finding the money.”